Scientific Thought of the Information Era

It was a social experiment (see a movie) that had meant demonstrating the picture, named “Edmond de Belamy”, to respondents. The question “Who is an author of this picture from their point of view?” was asked them. There were very different answers and most of them boiled down to the citations of well-known painters. But if the respondent hadn’t known the real background of this picture, this respondent wasn’t able to give the right name of the painter. The main feature of this picture is that fact that it has been created by not a human but by a computer technology – Artificial Intelligence (AI). But on October 2018 it was sold for $432,5К at a Christie’s auction (its original estimate was near [1]). And this fact is the most significant feature of this picture.

This event has two important meanings. On the one hand AI took the strategic technological hurdle that had been the last of differences between it and a human [2]. Up to now AI could “think” on the basis of only search engines algorithms. Now AI is able to create art and generate all-new products by uniting, mixing and synthesizing existing information. On the other hand AI-art is able to be accumulated and be commercialized as we can see. In these two meanings the humankind has to realize that a new era has begun.

Every period of every next new era beginning (the Paleolithic, the Neolithic, the Ancient Age, the Middle Age, the Modern Age or the Industrial Age) has been associated with some historical events that are characterized in many books on Humankind history or history of economy and economic thought. But in all these historical facts we have to be able to see much deeper reasons of the humankind moving to the next new historical era. The new groundbreaking technology has always been the real reason for it. By the way the humankind skills to create new food by cultivation plants were such the kind of the innovative technology, that parted history into the Paleolithic and the Neolithic [3]. On the basis of this analogy the appearance of the AI-generated portrait of fictional ‘Edmond de Belamy’ seems to turn into the historical fact of AI moving from ‘AI-Paleolithic ’ to ‘AI-Neolithic’… What’s next?..

The world (the art word firstly) faces with a very formidable competitor represented by AI. The developers of the AI-painter highlight that the generating process of new art-work has been realized the same way that an ordinary painter feels inspired by walking in a gallery [1]. So if humankind wants to learn how to compete with such the type of the high-technological competitors, it has to learn thinking the same way that AI ‘thinks’. All spheres of life need that. But firstly the future co-developing of humankind and AI is in need of understanding general trends of this process. That is why every future generation has to study humankind history and this has to be in the basis of scientific thought of the Information Era.

The strongest challenge for a new Information Era is Big Data and its exponential growth due to the rapid acceleration of world development [4]. It is turning into more difficult process for a modern person to understand and manage Big Data (why investments into AI-technology are growing up and such the way they are creating the strong competitor for [5]). So the studying process of humankind history that forms general understanding of the future trends is getting complicated hereafter by Big Data. For example, now incidents of ten years ago seem to be from the remote past. It’s the main reason of huge complication of the studying process.

The special technology on the basis of ‘four-dimensional thinking’ [6] has been proposed for simplifying the process of studying of history (history of economy, history of chemistry, engineering, information and communication technology, philology, psychology or so on) and been tested by lecturing of the discipline on ‘History of economy and economic thought’ for the International Economy Department in National Technical University of Ukraine “Igor Sikorsky Kyiv Polytechnic Institute”. This lecturing technology is characterized by some ideas that adapt the process of studying of Big Data of humankind history to the future Information Era.

On the one hand it isn’t effective to study deeply all information about particular question as it has been established in traditional education system in the Industrial Era [7]. Although from the physiological point of view the human brain can remember all information that has been generated on the Internet, the people do not do this and they may be not able to do this from the psychological point of view. For the representatives of ‘I’-generation [8] it is characterized with clip-thinking, the Google-effect, procrastination, so on [9; 10]. Value of information is losing under the conditions of moving from the Industrial Era to the Information Era [11]. So the tools for management of Big Data are going to be more important in the future. The role of experts and teachers is rising up by this [11].

On the basis of ‘four-dimensional thinking’ [6] ‘I’-generation has to learn how to move on the time scale freely, interactively, chaotically, peripherally and superficially in the first instance instead of deep learning, to be able to see important historical events on it and explain them. So-called ‘needlepoint’ is being formed in the conscious of a modern person. It consists of inter-related and repetitive historical events that taken all together to create a generalized historical ‘pattern’. Further every this event makes a person be able to self-study it more deeply on the basis of existing information that is widely available. Moving on the time scale in the past is important the same as the ability of moving to the future by predicting consequences of contemporary trends on the basis of the ‘pattern’ of the future. The future of history is based on duplications of the past.

On the other hand in the information society the process of learning of the historical events has to be directed not from the past to the present but rather, from the present to the past (to every historical era). It’s necessary to answer to the important questions: ‘What is the next step?’ In consequence of the modern world history acceleration, the superficial and chaotic search of the similar pattern in the previous historical eras is more effective. And when such the definings points are found, it is necessary to start studying to the deep. Learning is not enough. We also need reasoning.

The studying technology has been beta-tested under the unique Project of the English-language economic education in Ukraine realized by the Department of International Economics, the Faculty of Management and Marketing (http://ied.kpi.ua/en) in National Technical University of Ukraine “Igor Sikorsky Kyiv Polytechnic Institute”. The main feature of this project is the fact that it has united representatives from very different parts of the world: Asia, South America, Africa and Europe with very different cultures, world perceptions and historical developments. The English language has been the only thing that has been in common between the Project participants. The discipline of ‘History of Economics and Economy Thought’ that has been taught with testing the proposed technology of studying turns into the interactive multi- and interdisciplinary international project that lays the foundation of new knowledge. Every Project participant complemented the general ‘pattern’ of history of economics on a practical level of the native country history. It makes traditional economic thought be implemented in a new different and upgraded way in different countries in the world. Positive feedback from representatives of different countries and project participants (see the movie below) provides the conclusion that the proposed technology is effective.

It’s necessary to realize that if we don’t implement such types of innovative technologies of management of information chaos, these technologies will outstrip us and we can turn into outsiders under the competitive struggle with AI…

Agriculture: a Tool for Sustainable Development in Ghana*

Science and Technology in Latin America* 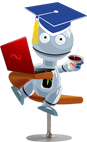